Bonnie-After growing up in the Philadelphia area, Bonnie spent her career as an executive secretary, first at Sun Oil Company and most recently with BDO Seidman in Charlotte before retiring in 2000.  Bonnie’s real passion, however, is acting.  She began her career on the stage at the tender age of 5 as a Pilgrim in her kindergarten play and continued stage work until the 1980’s when she moved to Charlotte, got an agent and began acting in films.  She has had a principal role in over 100 theatrical and TV feature and independent films, as well as commercials, print and web ads.  During her career, she has been in scenes with stars such as Denzel Washington, Robin Williams, Julia Roberts, Tommy Lee Jones, Colin Firth and Neve Campbell to name a few.  Her favorite co-star is her husband Ted, and they have worked together in a number of  films, commercials and industrials.  You can see Bonnie’s body of film work on IMDb as Bonnie Johnson (I) at http://www.imdb.com/name/nm0176922 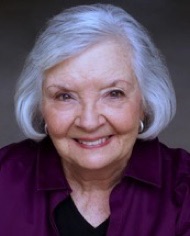 Ted-With a BS in Chemical Engineering from Lehigh University and an MS in Industrial Administration from Carnegie Mellon University,Ted is enjoying a second career in acting.  Having grown up in the Pittsburgh area, he retired in 2000 as a Senior Vice President for Bank of America, following forty years in business, most of it with BNY Mellon in the corporate financial services and securities industries.  He has appeared in over 50 theatrical and TV feature, independent and student films as well as numerous commercials, industrials, voice-over and web productions. He especially enjoys roles he can do with Bonnie such as parent or grandparent roles.  He has worked in films with Andie MacDowell, Dean Jones, Billy Campbell and Olga Kurylenko as well as Directors Anson Williams and Steven Spielberg.  Ted plays a euphonium horn in the Charlotte Concert Band and his church orchestra. He dearly appreciates the coaching and encouragement he has received from Bonnie as she has helped him develop this second career.  Ted’s IMDb site with a list of his work is is at Ted Johnson (V) at http://www.imdb.com/name/nm1418871